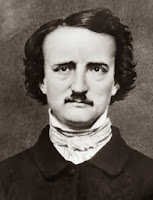 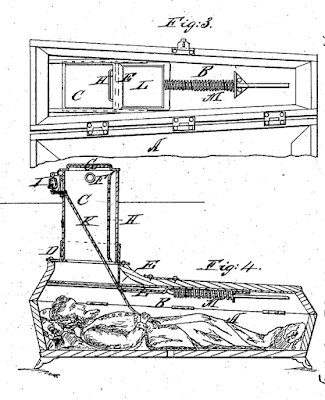 Buried Alive!
In the nineteenth century many had a fear of being buried alive. There were reports of people being in a near-death state and being pronounced dead by hack doctors of the day. Atlas Obscura published a nice article about some of the contraptions invented so people could alert those above ground that they were still alive in their coffin.


Of course Edgar Allan Poe, being . . . well . . . Edgar  Allan Poe, could not resist playing on these fears. In 1844 he wrote "The Premature Burial" in the Philadelphia Dollar Newspaper. Enjoy! 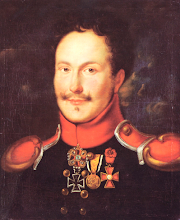 Baron Friedrich Heinrich Karl De la Motte Fouquâe (1777-1843)
In 1827, German author Baron Friedrich la Motte Fouquâe published a fantasy story called "The Goblin of the Field" or "The Field of Terror." The trope explores the idea of evil being able to take on a physical location. It is an excellent horror story for the first half of the nineteenth century, but failed to reach the level of the tales I picked for 6a66le: The Best Horror Short Stories 1800-1850. Enjoy! 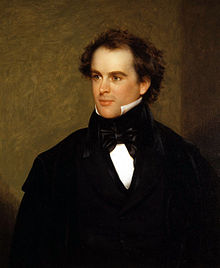 Nathaniel Hawthorne was no stranger when it came to telling a scary ghost story. His "Legends of the Province House" was mentioned as being exemplary by H.P. Lovecraft and his 1835 story titled "Graves and Goblins" is quite good. But this post is about Lady Eleanor's Mantle, and one of the scary ghost stories for the first half of the nineteenth century. "Lady Eleanor's Mantle" is a tightly-woven scary short story of pestilence and because of that it draws certain parallels to Edgar Allan Poe's "Mask of the Red Death," which is included in my book: The Best Ghost Stories 1800-1849: A Classic Ghost Anthology.

Now, a little background about the story. Samuel Shute was the Royal Governor of Massachusetts for seven years, from 1716 to 1723. Without giving away too much, the horror story contains an insane person and there was an outbreak of smallpox in Boston during the winter of 1721-1722. Over 800 people died in the outbreak.

LADY ELEANORE ROCHCLIFFE, being orphaned, was admitted to the family of her distant relative, Governor Shute, of Massachusetts Bay, and came to America to take her home with him. She arrived at the gates of Province House, in Boston, in the governor's splendid coach, with outriders and guards, and as the governor went to receive her, a pale young man, with tangled hair, sprang from the crowd and fell in the dust at her feet, offering himself as a footstool for her to tread upon. Her proud face lighted with a smile of scorn, and she put out her hand to stay the governor, who was in the act of striking the fellow with his cane.

"Do not strike him," she said. "When men seek to be trampled, it is a favor they deserve."

For a moment she bore her weight on the prostrate form, "emblem of aristocracy trampling on human sympathies and the kindred of nature," and as she stood there the bell on South Church began to toll for a funeral that was passing at the moment. The crowd started; some looked annoyed; Lady Eleanore remained calm and walked in stately fashion up the passage on the arm of His Excellency. "Who was that insolent fellow?" was asked of Dr. Clarke, the governor's physician.

"Gervase Helwyse," replied the doctor; "a youth of no fortune, but of good mind until he met this lady in London, when he fell in love with her, and her pride and scorn have crazed him."

A few nights after a ball was given in honor of the governor's ward, and Province House was filled with the elect of the city. Commanding in figure, beautiful in face, richly dressed and jewelled, the Lady Eleanore was the admired of the whole assembly, and the women were especially curious to see her mantle, for a rumor went out that it had been made by a dying girl, and had the magic power of giving new beauty to the wearer every time it was put on. While the guests were taking refreshment, a young man stole into the room with a silver goblet, and this he offered on his knee to Lady Eleanore. As she looked down she recognized the face of Helwyse.

"Drink of this sacramental wine," he said, eagerly, "and pass it among the guests."

"Perhaps it is poisoned," whispered a man, and in another moment the liquor was overturned, and Helwyse was roughly dragged away.

"Pray, gentlemen, do not hurt my poor admirer," said the lady, in a tone of languor and condescension that was unusual to her. Breaking from his captives, Helwyse ran back and begged her to cast her mantle into the fire. She replied by throwing a fold of it above her head and smiling as she said, "Farewell. Remember me as you see me now."

Helwyse shook his head sadly and submitted to be led away. The weariness in Eleanore's manner increased; a flush was burning on her cheek; her laugh had grown infrequent. Dr. Clarke whispered something in the governor's ear that made that gentleman start and look alarmed. It was announced that an unforeseen circumstance made it necessary to close the festival at once, and the company went home. A few days after the city was thrown into a panic by an outbreak of small-pox, a disease that in those times could not be prevented nor often cured, and that gathered its victims by thousands. Graves were dug in rows, and every night the earth was piled hastily on fresh corpses. Before all infected houses hung a red flag of warning, and Province House was the first to show it, for the plague had come to town in Lady Eleanore's mantle. The people cursed her pride and pointed to the flags as her triumphal banners. The pestilence was at its height when Gervase Helwyse appeared in Province House. There were none to stay him now, and he climbed the stairs, peering from room to room, until he entered a darkened chamber, where something stirred feebly under a silken coverlet and a faint voice begged for water. Helwyse tore apart the curtains and exclaimed, "Fie! What does such a thing as you in Lady Eleanore's apartment?"

The figure on the bed tried to hide its hideous face. "Do not look on me," it cried. "I am cursed for my pride that I wrapped about me as a mantle. You are avenged. I am Eleanore Rochcliffe."

The lunatic stared for a moment, then the house echoed with his laughter. The deadly mantle lay on a chair. He snatched it up, and waving also the red flag of the pestilence ran into the street. In a short time an effigy wrapped in the mantle was borne to Province House and set on fire by a mob. From that hour the pest abated and soon disappeared, though graves and scars made a bitter memory of it for many a year. Unhappiest of all was the disfigured creature who wandered amid the shadows of Province House, never showing her face, unloved, avoided, lonely.

Posted by Andrew Barger at 4:18 PM No comments: