Review of the Complete Stories of Truman Capote by Andrew Barger 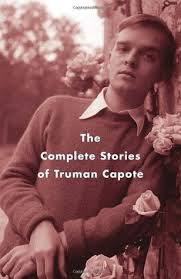 There is Truman Capote looking impish and floral as he leans against a trellis of roses somewhere in the Deep South. He is best known for his character-driven novel "Breakfast at Tiffany's" and an embellished non-fiction book, "In Cold Blood." Having liked the former novel, I was excited to read Capote's short stories. The same attention to detail and character generation found in "Breakfast Tiffany's" was evident in the many tales he wrote before its publication.

Southern Accents - Check!
Flawed but Likable Characters - Check!
A Horror Story - Che . . . hey, just one second. What's the big idea, Mr. Capote? How could you? You were supposed to give us Alabama love stories set in the 1940s and 1950s. How dare you? Writing good horror is not easy, but there you go, standing up a creepy horror tale among the tales of love and poverty in the Deep South.

"Miriam" is the name of the fiendishly little horror story Capote unleashed on me like a ghost springing out from behind the curtains. Miriam is a little girl he describes as: "Her hair was the longest and strangest Mrs. Miller had ever seen: absolutely silver-white, like an albino's." I won't say much more other than she goes to stay with Mrs. Miller who has lived alone in an apartment for several years. Yikes.

There are many great stories in Capote's fantastic collection. "Master Misery," "A Diamond Guitar," and "The Thanksgiving Visitor" are written at high levels and worth your time. And "Miriam" is certainly worth your time if you are a horror story lover.

Posted by Andrew Barger at 10:21 AM No comments:

With Teeth
by
Andrew Barger

As one might expect from the stories in this annotated, best vampire story anthology, teeth were used prominently in the nascent development of the vampirism mythos. And due to the human-monster theme, vampire stories developed more quickly and became more robust from both story and character development than other genres during the period in question, such as werewolf and ghost stories; so much so that they triumphed over most novels in this respect. Yet many claim that short stories are a lesser art form than the novel.

Does time bolster art and transform it into something more robust? Certainly as the aging of a Bordeaux brings out complexities of character unknown in newer wines, so too does the novel offer a bouquet of characters that are impossible to foster in the limited pages of a short story. Characters like certain wines take time to develop, and in this aspect deference must be given to the novel in whatever modern form it may take.

Where critics of short fiction often err, however, is assuming that more pages equate to greater literary art. It’s been claimed Earnest Hemmingway said that the phrase “Baby carriage for sale – slightly used” is the best thing he ever wrote.

The literary world is marred with dead trees and terrible, fat novels. Does length equal creativity and originality? Do pages equal greatness? Does size matter in fiction? Edgar Allan Poe, the same author who formed the foundation of the modern short story, claimed just the opposite. He preferred a complete tale that could be consumed in one sitting without interruption of the reader’s concentration.
And it was the same Edgar Allan Poe who likely never penned a vampire story given the research I conducted in Edgar Allan Poe Annotated and Illustrated Entire Stories and Poems and Coffee with Poe: A Novel of Edgar Allan Poe’s Life. If a reader has to stretch their imagination to determine if a character is a vampire, then it is likely not a vampire.

Teeth play a telling role (as does the presence of blood) in many vampire tales. Because of this a number of anthologist have placed Poe’s “Ligeia” in their collections in the hopes that if the tale is put in a substantial number of vampire anthologies it will be transmogrified into a vampire story. This is certainly a misapplication in a story where the supposed vampire never comes in contact with another vampire. When Ligeia dies and is subsequently brought back to life through Rowena’s body, the unnamed protagonist touches her and she moves away, again displaying no lust for blood. Before her death, Rowena is given a cup of reddish liquid that could easily be wine or a potion concocted by the protagonist. There is no evidence that anyone’s blood was spilt. The only other hint of vampirism comes when Rowena’s lips part on her deathbed to display a line of “pearly teeth.”

Yes, it would be nice for this fifty year period, this cradle of all vampire short stories in the English language, to include a vampire tale by Edgar Allan Poe. But the sad answer is that Poe never penned a vampire story. Poe’s only reference to vampires were in his poems. “Tamerlane” references a vampire-bat and “To Helen” calls out vampire-winged panels. Articles about the vampire motif in “The Fall of the House of Usher” have been disorganized and unconvincing. Essays about a volitional vampire in “Morella” have . . . well . . . sucked. The ponderous dissertations that seek to attribute the protagonist’s lust for teeth to a vampire fixation in “Berenice” have felt chompy. Vampires do not lust for teeth, rather blood. A Poe story listed in the Table of Contents for an anthology boosts sales. Nevertheless, in the case of vampire anthologies, Poe’s inclusion is misdirected.

Unlike the pure horror story genre in The Best Horror Short Stories 1800-1849, where Edgar Allan Poe and Nathaniel Hawthorne wrote five of the dozen tales selected and the ghost story genre where Poe, Hawthorne and Irving collectively penned forty percent of tales in The Best Ghost Stories 1800-1849, American writers (apart from one) are sadly lacking from authorship of the vampire stories for this period as they are for the werewolf genre. The top purveyors in these genres all hail from Europe apart from a few limited exceptions.

This makes sense given the rise of vampire legends throughout Europe, especially countries touching the Carpathian and Harz Mountains. In the April 1819 issue of the New Monthly Magazine “The Vampyre; A Tale” was published as the first vampire short story originating in the English language. The ruminations of a plot for the story were constructed by Lord Byron; yet it was fleshed out and ultimately written by John Polidori, his physician, on a literary dare. Lord Byron, in turn, got the idea from tradition and folktales. The state of the vampire legend before this story was best laid out in an article published in The Monthly Review of May 1819:


“The superstition, on which the tale is founded, universally prevailed less than a century ago, throughout Hungary, Moravia, Silesia, and Poland; and the legends to which it gave rise were not only believed, but were made the subject of learned disputations by the divines and physicians of the times. In Dr. Henry More’s Philosophical Works, and in Calmet’s Dissertation on Apparitions, may be found many interesting particulars relating to this fancy; and in the latter is an ample account of its origin and progress. It was imagined that men, who had been dead for some time, rose out of their graves and sucked the blood of their neighbours, principally the young and beautiful: that these objects of their attack became pale and livid, and frequently died; while the vampyres themselves, on their graves being opened, were found as fresh as if they were alive, and their veins full of good and florid blood, which also issued from the nose, mouth, and ears, and even through the very pores of the skin. The only mode of arresting the pranks of these tormentors was by driving a stake through the heart of the vampyre; a practice frequently adopted, and during the performance of which, we are told, he uttered a horrid groan. The body was then burned, and the ashes thrown into the grave.”

In John Polidori’s foreword to “The Vampyre” we learn that much of the vampire legend bubbled up through poetry and European legend as did many of the tales found in The Best Werewolf Short Stories 1800-1849. Yet not all of them. In 1679 “The Blood-Drinking Corpse” was published from a posthumous collection by Pu Songling (1640-1715) titled Strange Stories from a Chinese Studio. He was an educator whose hobby, apparently, was to write down popular Chinese folktales. When he died he had collected nearly 500 of them. One of the first English translations was in 1913 and it can be presumed that none of the authors in this collection had access to it.

In response to “The Vampyre,” came the quick publication of “The Black Vampyre, a Legend of St. Domingo” by American, Robert Sands. And from there the vampire mythos fluttered off in the English language, darting from one short story to the next until in 1847 the novel Varney the Vampire, or the Feast of Blood was serialized in a London Penny Dreadful. Fifty years later the world received one of the best horror books ever written--Dracula by Bram Stoker.

From folktales to poetry to short stories to novels, the vampire mythos has developed into the robust, character-driven genre we have today—and it has done so with teeth. In my anthology are what I consider the best vampire short stories published in the first half of the nineteenth century in the English language. I hope you enjoy them.

Posted by Andrew Barger at 1:35 PM No comments: