It's a holiday weekend here in America and what better time to reveal the cover for my latest book: Mesaerion: The Best Science Fiction Stories 1800-1849? Soon I will announce what great sci-fi stories I have uncovered, some of which have not been republished in over 150 years. Meantime, the ebook is out now if you simply cannot wait. You know who you are!

Posted by Andrew Barger at 9:48 PM No comments:

My literary hat is off to Ken Kesey for writing one of the best English language novels of the 20th century! It belongs on the shelf next to Flowers for Algernon, The Catcher in the Rye, Breakfast at Tiffany's, The Great Gatsby, Of Mice and Men, and other great American novels that took characters to new heights in the past century. The title of novel is taken from a children's rhyme:

One Flew Over the Cuckoo's Nest shines brilliance in every corner of the dark asylum in which it's based. It's a place where patients are hosed down, tied to their beds at night, their mouths stuffed with colorful pills to make them behave and if they don't, if they should dare challenge the bulking nurse--Miss Ratched--they are given a ticket to the amusement park funland called the electro-shock therapy lab.

The novel is told from the POV of an American Indian who has no business being in an insane asylum other than to escape his oppressive upbringing. Times are hard until McMurphy enters the asylum. The Jack Nicholson movie of the same name is quite good, too, but even the great actor cannot measure up to McMurphy, the character he plays in the movie. He lands in the looney bin for no other reason than to escape a hard labor sentence for his crimes. That's when the fun really begins as he incites the others to stand up for themselves against the oppressive regime.

One Flew Over the Cuckoo's Nest was published in 1962, nearly 120 years after Charles Dickens toured the North East insane asylums of America, which he recounted in his "American Notes." There he told of a cruel system that did little to rehabilitate the insane. Edgar Allan Poe and many others felt Boz did American wrong when he returned to England and wrote his unflattering account. Three years later Edgar Allan Poe would pen one of the first English language short stories set in an insane asylum ("The System of Doctor Tarr and Professor Fether"), in which he lampooned many politicians of the day as analyzed in Edgar Allan Poe's Annotated Short Stories, which I edited.

Sadly, little had changed from the Victorian Age of Dickens and Poe, to the early 1960s when Kesey published OFOCN. The novel, however, did what Charles Dickens was unable to do by changing the way the insane were treated in America. It's still not a perfect system and probably never will be, but one that is less reliant on drugs and that has nearly eliminated lobotomies. So says my aunt who spent nearly her entire career as a nurse in an insane asylum. I can still remember as a boy, sitting wide-eyed around the table, while she told of the many fascinating things that when on there. Some of them were funny and some were downright creepy. I thought it would be impossible to attempt to capture these fascinating characters into a novel. Heck, I thought it crazy to even try.

Yet, Kesey has somehow accomplished it. He has distilled the experience (based on his own time spent working at an asylum) into one fantastic novel where freedom triumphs over oppression and conformance, when it is coherent and not drugged up or sent smoldering to bed after a few hundred volts were applied to the temples.
Posted by Andrew Barger at 4:16 PM No comments:

Email ThisBlogThis!Share to TwitterShare to FacebookShare to Pinterest
Labels: one flew over the cuckoo's nest review by andrew barger 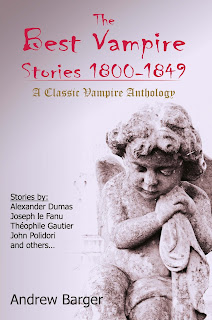 In 1848 Alexander Dumas published "The Vampire of Carpathian Mountains" (also called "The Pale Lady") in his French short story collection One Thousand and One Ghosts. It is a fantastic book that contains some of the best supernatural tales Dumas ever penned. And if you have at least a reading knowledge of the French language, it is well worth the effort of flagging it down on Gutenberg.org or some other site.

With the aid of a translator in Montreal and a little help from online translators, I went to work. A month later I had in front of me an English translation of the "Vampire of the Carpathian Mountains" in a form that is much closer to what Dumas originally intended. I immediately updated the ebook versions of the collections and they are live now with the non-abridged story. I hope you enjoy it and forgive my faux pas.
Posted by Andrew Barger at 9:12 PM No comments: