Few photographs exist of Leo Tolstoy and even less moving pictures. The video below shows Tolstoy as he had gotten up in years.

Most of footage was shot after he had published his excellent Tolstoy short stories of love, war and as a guide to his beloved peasants. On his grave Tolstoy asked to die as a peasant. At this time of the year he makes think of a skinny Santa Claus.
Posted by Andrew Barger at 4:57 PM No comments:

Review of The Outsiders by S. E. Hinson 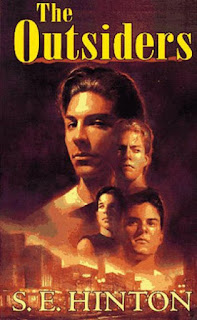 If you have yet to read The Outsiders by S. E. Hinson that was published in 1967, you may have seen the 1983 film direct by Francis Ford Coppola. It had a star-filled cast that included Tom Cruise, Patrick Swayze, Rob Lowe, and Matt Dillon.

This post, however, is about the excellent novel. It is set in Oklahoma and pits Greasers (boys from a blue collar families) against Socs (kids from white collar families). I admit that I was a little disappointed to learn that the novel centered around gang violence, for which I have no interest. But I stuck with the novel if for no other reason than the writing was top notch and the characters were believable and somehow real.

When I finished the novel, I realized that I really like it and now hold it in high regard. Mrs. Hinson has done a difficult trick for writer and that is to get someone (many tens of thousands of someones) to love her novel when they have little interest in the subject matter.

Posted by Andrew Barger at 10:19 AM No comments: