The Rudyard Kipling House in London 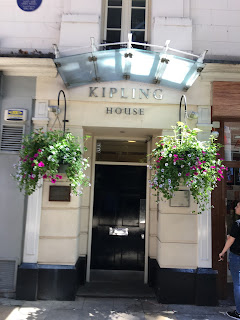 On a recent trip to London I was strolling up Villers street when I saw to the right of me a squeezed building called Kipling House. "Certainly that cannot be the Kipling," I said to my companion. So I asked the same of the a young man enjoying a puff or two on a cigaret in the awning's shadow. "Yes, the Rudyard Kipling lived here for a couple years," he verified. That's one of the coolest things about London is that the history city is so chockablock with literary haunts that you find them walking about.

So I snapped a photo on my phone and continued up Villers. When I got back in the States I researched it. Rudyard Kipling lived there from 1889-1891. Kipling stated: "From my desk I could look out of my window through the fanlight of Gatti's Music-Hall entrance, across the street, almost on to its stage. The Charing Cross trains rumbled through my dreams on one side, the boom of the Strand on the other, while, before my windows, Father Thames under the Shot tower walked up and down with his traffic."

Kipling wrote segments of his novel The Light that Failed in the house. He did not, however, pen his ghost short stories there. His most popular is "The Strange Ride of Morrowbie Jukes published in 1899. That story, nor any of Rudyard Kiplings other ghost stories rose to the level of The Best Ghost Short Stories 1850-1899: A Phantasmal Ghost Anthology given their lack of terror-inducing storylines.

But the next time you are strolling along Villers Street in London and pass building 43, look up and see the digs of famous author of his day (though a middling ghost story writer).

Posted by Andrew Barger at 6:56 PM No comments: 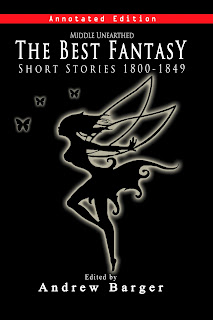 Two hundred years before Game of Thrones became a hit series of novels and popular HBO TV episodes, the fantasy genre was launched by short story authors. I have searched old magazines and forgotten journals to find the 10 best fantasy stories that launched a genre. I then annotated them and provided a list at the back of the collection of all the stories considered for the anthology. I further included background introductions to each story and author photos, where available.

1836 "The Story of the Goblins Who Stole a Sexton" by Charles Dickens is thought by many to be a precursor to A Christmas Carol given the subject matter and goblins that a certain grouchy sexton meets on Christmas Eve.

1839 "The Kelpie Rock" by Joseph Holt Ingraham draws on the prior writings of Washington Irving in the Hudson River Valley while giving the world one of the best fantasy stories by an American during this important period in the genre.

1831 "Transformation" by Mary Shelley is the best fantasy short story by the famous author of Frankenstein.

1819 "Rip Van Winkle" by Washington Irving gives a look into the American Revolution by one of America's most famous authors and is also the oldest story in the collection.

1824 "Lilian of the Vale" by George Darley is a haunting fantasy short story that is the cornerstone of all modern fairy stories.

1835 "The Doom of Soulis" by John MacKay Wilson recounts a haunting legend of a wizard that will not soon be forgotten.

1827 "The Dwarf Nose" by Wilhelm Hauff provides one of the best dwarf short stories ever written by one of Germany's most talented authors who died way before his time.

1829 "Seddik Ben Saad the Magician" by D.C. is a mystical story that conjures thoughts of Arabia, astrology, and the black arts.

1845 "The Witch Caprusche" by Elizabeth F. Ellet tells a haunting fantasy story of a witch and the thirst for power that leads to a bitter end.

1837 "The Pale Lady" by George Soane recounts a peculiar visitor who comes to stay at a castle that came only stem from the mind of one of the most underrated English fantasy authors of the nineteenth century.

Before there was a lovable green ogre called Shrek and a bespeckled wizard named Harry Potter, there were the best fantasy short stories published in English during the first half of the nineteenth century. Read today. http://www.andrewbarger.com/bestfantasyshortstories1800.html

They are included in my new classic anthology, Middle Unearthed: The Best Fantasy Short Stories 1800-1849. Before there were lovable ogres named Shrek and a quizzical boy wizard named Harry Potter, there were these groundbreaking fantasy stories that laid the foundation of so many great works to come. This annotated collection is on sale now at $12.99 for the book and $3.99 for the ebook. Read these stories from the Middle Earth of fantasy writing today.

Posted by Andrew Barger at 9:49 AM No comments: