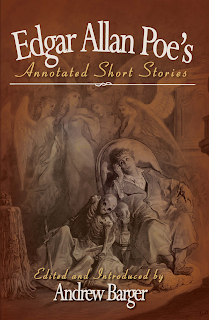 Introduction Years before the black raven was engrained into the minds of Americans as a reminder of lost love, another sable animal gained Poe fame. "The Black Cat" ranks as one of Poe's best tales. He actually owned a black cat in 1840 when he published a short article entitled "Instinct vs. Reason." Here is a snippet: "The writer of this article is the owner of one of the most remarkable black cats in the world and this is saying much; for it will be remembered that black cats are all of them witches. The one in question has not a white hair about her, and is of a demure and sanctified demeanor."

Poe was a lover of cats to be sure. Besides his black cat, he owned a tabby cat with his wife, Virginia, named Catterina. Like many of his tales, there are other autobiographical elements here. As a child Poe killed a pet bird owned by his foster mother, Frances Allan, and later felt guilt and remorse.

Posted by Andrew Barger at 9:35 AM No comments: