In PDF form, here is a list of songs about books - novels, short stories and poems. Since this week the list is authors with a last name starting with F, think of:

"Glory Days" by Bruce Springsteen based on The Great Gatsby by F. Scott Fitzgerald

Enjoy and follow my blog to be notified about other great songs inspired from books as I move down the alphabet of authors.

Posted by Andrew Barger at 4:09 PM No comments: 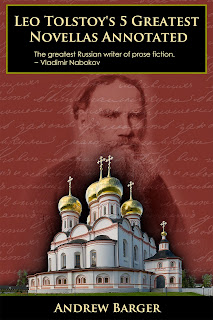 Below is a Q&A I did for Tolstoy's best short novels (or long short stories) that I annotated. I hope you enjoy it.

Q1: You have previously edited Leo Tolstoy's 20 Greatest Short Stories Annotated. What made you turn to his shorter novels that we today call novellas?

A1: A dainty literary word, isn't it? Tolstoy's novellas offer much richer characters than his short stories. His war stories are especially vibrant since he drew from his war experiences in the Caucus.

Q2: What is your favorite Tolstoy novella?

A2: "Master and Man." Only Tolstoy could write a short novel that shows the juxtaposition between the rich and the poor in such a way. There is cruelty, a Russian snowstorm, just deserves, and love. The ending is fabulous.

Q3: Why did you annotate this collection of Tolstoy novellas?

A3: Just like for his best short stories, I wanted to add color to Russian terms and many of the historical figures mentioned by Tolstoy who were popular individuals of the day. I think many people think of Tolstoy as an author who wrote during the long Russian winters in a cabin and was a bit out of touch with popular society. The opposite is true. Tolstoy was very topical for his day. He references the leading artists and met a lot of his contemporaries--at least in Russian literature. Tolstoy came from a high society family with deep ties to the military and Russian aristocrats. He was also well traveled, which only wealthy families could afford in those days. His story about the Swiss hotel he visited in Lucerne is included in Tolstoy's best short stories and is one of his best.

Q4: What do you think Tolstoy would write about if he were alive today?

A4: He would still be calling out religious wrongs and trying to help the poor. Not much would change. Tolstoy loved gardening and living off the land. He was anti-establishment, too. He was the first to start a Montessori-type school. He wore peasant clothes and didn't shave his beard. Tolstoy was the original hippie. (Laughs)

Q5: What surprised you the most about these stories?

A5: It has to be Tolstoy's comedic side. As Americans we tend to think of Russians as rather stoic and serious people. Of course, that is not the case all the time, but it is a perception. Tolstoy is no different. Most people, myself included, think of Tolstoy as the serious Russian bear of literature. Yet most of the five novellas included in the anthology have moments that caused to me laugh out loud. That's saying a lot since some of them are 150 years old.

Posted by Andrew Barger at 9:23 PM No comments: 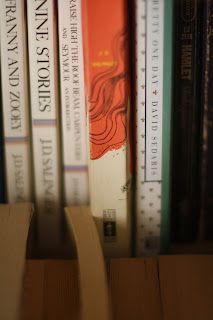 To the Editor of the Wordsworth Osgood Keary Ellet Journal

My name is Bethilda Spaghetti Ed.D., M.L.S., B.A., Sa.G, G.Y.A., S.S. My colleagues at Peculiarin State University refer to me as Betty Ed.D., M.L.S., B.A., Sa.G, G.Y.A., S.S., for short. As you are not my colleague you will salute me at all times as Ms. Bethilda Spaghetti Ed.D., M.L.S., B.A., Sa.G, G.Y.A., S.S., for long.
I am the editor of the Wordsworth Osgood Keary Ellet Journal, which explores the varied works of that premier female literary icon of the romantic age, Wordsworth O. K. Ellet. The journal is published bi-quarterly. This means every other quarter or twice a quarter. I am not quite sure. I have trouble with math . . . and science and chemistry and engineering. I was left with history or literature. Since I had five cats and knew a lot about litter, I chose the latter.
I have a dozen novels of my own stashed away on my harddrive that have never been published. Editors fail to understand my genius. When I die I am sure they will be discovered for the literary masterpieces that they are and I will be “posthumously popular” as Wordsworth O. K. Ellet put it in her floral poem “Autumn’s Mums and Dads.”
But I am talking about today and today my place in the world is very important.
As proof, I am sure you have read my essay titled “Polar Bear Existential Notions and Stamen Manifestations in The Scarlet Rose Giftbook” published in the Q2 edition of the journal in 1973. It was very well received by the academic community. I won the Eros Psyche Award in Literary Scholarship. Obviously the award was from Europe--Turkey, I believe. When I am in that country I eat as many Eros as possible, which is how I know the award comes from Turkey in the first place. I proudly display the trophy on the particle board bookshelf in my office. If you have never seen one--the trophy, not the bookshelf--it has the head of an elephant, torso of a whale, and lower extremities of a donkey. The trophy is painted gray as you might imagine. I dispute that it matches my hair color.
One of my many accomplishments at the journal over these many decades is the implementation of my triple impaired review. The way I set it up, there are three reviewers for each outside submission to the journal. One reviewer is blind, one is deaf, and the other is mute. The deaf reviewer reads each submission to the blind reviewer. The blind reviewer has a fantastic sense of smell and can sniff out a terrible submission from a mile away. The mute reviewer is our best writer and she types out the issues with the article in question so we can reject it as fast as possible.
Of course, none of the reviewers knows who the submitter of the article is, either, which I guess makes it a quadruple impaired review (again, the math). I will call it Fourierism. I should say none of the reviewers knows unless I tell them, which sometimes I do at literary keg parties at the university. When I drink my mouth runs like Kipchogee and I have been known to reach under my flower-printed blouse and pull off my bra and dance around with students one-third my age. Students gave me the nickname cantaloupes as a result, when they know full well I despise Kant. At the last party I was forced to use my bra as a Covid-19 mask. One can never be too careful when the virus is lurking. As you can tell, I am a terrible drinker, to be sure, so I try to practice drinking a lot!
But back to the articles! A wanker submitted one on a new Wordsworth O. K. Ellet discovery. It was something about an approbation of part of an Ellet poem she took from another poet that had not been found in over 180 years since Ellet died. I took the article as both an affront and an arrears. It was as if we did not do our jobs here at the university. We strung the wanker along for years, making him chase his literary tail, telling the mute reviewer to type out “We are taking great pains to elucidate you on Ms. Ellet,” and then rejected the essay. Blam! It was so much fun, I tell you. That kind of nonsense does not belong in the journal. We seek to publish important literary articles of grave consequence like what Ellet thought of Leggings, Brazzeries, Global Temperature, Quagmires (L.B.G.T.Q), Dr. Seuss, and what pronouns she used. The world wants to know.
My specialty in the Ellet field, however, is the graphicality of Ellet’s works. You know, references to graphing mathematical equations throughout the vast extent of Ellet’s poems; or at least that’s what I tell everyone it means. Who really knows? That reminds me, I need to republish “Polar Bear Existential Notions and Stamen Manifestations in The Scarlet Rose Giftbook” on green graph paper. I might win another trophy for that one. Everyone knows green has environmental undertones. As you might suspect, I dedicated two years of the journal’s bi-quarterly issues to graphing mathematical equations via poetry. Then, another wanker had the audacity to write a letter to the editor asking why Ellet’s references to the paintings of Robert Weir, the famous Hudson River School Artist, were not mentioned. The wanker obviously did not understand the term graphicality.
If you want to hear more from me, subscribe to the journal.
Regards,
Ms. Bethilda Spaghetti Ed.D., M.L.S., B.A., Sa.G, G.Y.A., S.S.
https://www.AndrewBarger.com
#ModernStories #ShortStories #writer #literary #literaryjournals #literature #lit #journaling #Fourierism
Posted by Andrew Barger at 5:36 PM No comments: