Did Poe have a Favorite Ghost Story? 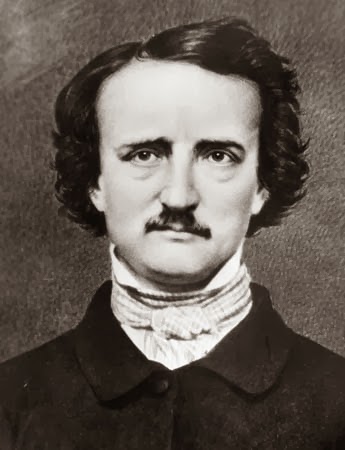 Poe was a connoisseur of the supernatural. As the author of Coffee with Poe: A Novel of Edgar Allan Poe's Life, I am sometimes asked if Poe had a favorite ghost story.

Truth be told, Poe was quite clear on his favorite ghost story--or at least his favorite by an American, which I believe is a dig at Charles Dickens and his bias toward British literature. The pick is also, perhaps a dig at Washington Irving whose "The Legend of  Sleepy Hollow" and "A Tale of the German Student" (both included in the best ghost stories anthology for the first half of the 19th century) branded him the best American ghost story writer during Poe's day.

The ghost story is by William Gilmore Simms and is titled Murder Will Out. I don't, however, agree with Poe since I did not place it in my scariest ghost stories from 1800-1849. This is what Poe had to say about the scary ghost story in his review (published posthumously in 1850) of Simm's collection of short stories: "The Wigwam and the Cabin."

All the tales in this collection have merit, and the first has merit of a very peculiar kind. “Grayling, or Murder will Out,” is the title. The story was well received in England, but on this fact no opinion can be safely based. “The Athenæum,” we believe, or some other of the London weekly critical journals, having its attention called (no doubt through personal influence) to Carey &amp; Hart’s beautiful annual “The Gift,” found it convenient, in the course of its notice, to speak at length of some one particular article, and “Murder Will Out” probably arrested the attention of the sub-editor who was employed in so trivial a task as the patting on the head an American book — arrested his attention first from its title, (murder being a taking theme with a cockney,) and secondly, from its details of southern forest scenery. Large quotations were made, as a matter of course, and very ample commendation bestowed — the whole criticism proving nothing, in our opinion, but that the critic had not read a single syllable of the story. The critique, however, had at least the good effect of calling American attention to the fact that an American might possibly do a decent thing, (provided the possibility were first admitted by the British sub-editors,) and the result was first, that many persons read, and secondly, that all persons admired the “excellent story in ‘The Gift’ that had actually been called ‘readable’ by one of the English newspapers.”

Now had “Murder Will Out” been a much worse story than was ever written by Professor Ingraham, still, under the circumstances, we patriotic and independent Americans would have declared it inimitable; but, by some species of odd accident, it happened to deserve all that the British sub-sub had condescended to say of it, on the strength of a guess as to what it was all about. It is really an admirable tale, nobly conceived and skilfully carried into execution — the best ghost-story ever written by an American — for we presume that this is the ultimate extent of commendation to which we, as an humble American, dare go.

The other stories of the volume do credit to the author’s abilities, and display their peculiarities in a strong light, but there is no one of them so good as “Murder Will Out.”