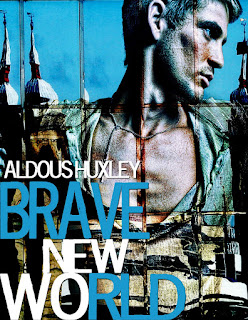 Brave New World by Englishman Aldous Huxley is a science fiction concept novel published in 1932. In Huxley's future world, the people of today are portrayed as savages and modern people are controlled by groupthink and a designer drug--soma. In the novel the people of today feel love, believe in God and pray. Base savages!

The novel has taken on a life of its own and is often read in high school and college classrooms. Many rock bands have created songs about it. But does that alone make it a classic?

The novel is thin in a few areas. Huxley has stepped on the trap that clamps on many a leg of sci-fi writers. He was unable to fully imagine a world 600 years (only 500 now) in the future with his descriptions. The most glaring example is the mode of transportation for the denizens of the future. Rocketships? Hovercrafts? Vacuum tubes? Try helicopters.

In the 1920s and 1930s is when commercial helicopters took flight. Brave New World was published in 1932. This is 100 years after the visionary authors in Mesaerion: The Best Science Fiction Short Stories 1800-1849 imagined travel to the moon and flight on the tails of comets.

Huxley hit close to the mark, however, on a number of his other visions. A detached sexual revolution would come 30 years later in the 1960s. Today, designer drugs are prevalent. Soma for all my little friends! Brave New World is one of the first novels to glorify tailored drugs and it was kept afloat in popular culture by Tim O'Leary and Ken Kesey in the drug fueled culture of the 1960s. Even on his deathbed Huxley asked his wife for LSD, which administered.

What has made Brave New World stand the test of time is the concept more than the execution. There is one on thing in the novel that makes it great. There are no enduring characters such as a Jay Gatsby or Holden Caufield or Randle McMurphy. The descriptions and writing style are good, but lacking in some ways as pointed out above. The concept is what holds the other middling elements together. And because of it the novel should be read in the context of a classic, though a minor one.