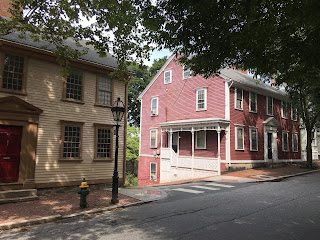 A few weeks ago, while visiting Boston, I took a day trip to lovely Providence, Rhode Island. The city is oozing with history. This is especially true on Benefit Street where wealthy socialites of the early to mid-nineteenth centuries built their large homes.

Oh! thou grim and ancient Raven,
From the Night’s Plutonic shore,
Oft in dreams, thy ghastly pinions
Wave and flutter round my door —
Oft thy shadow dims the moonlight
Sleeping on my chamber floor.

Romeo talks of “White dove trooping,
Amid crows athwart the night:’
But to see thy dark wing swooping
Down the silvery path of light,
Amid swans and dovelets stooping,
Were to me, a nobler sight.

Oft amid the twilight glooming
Round some grim ancestral tower
In the lurid distance looming,
I can see thy pinions lower, —
Hear thy sullen storm-cry booming
Thro’ the lonely midnight hour.

Oft this work-day world forgetting,
From its toil curtain’d snug,
By the sparkling embers sitting
On the richly broidered rug,
Something round about me flitting
Glimmers like a “Golden Bug.”

Dreamily its path I follow,
In a “bee line” to the moon
Till, into some dreamy hollow
Of the midnight sinking soon,
Lo! he glides away before me
And I lose the golden boon.

Oft like Proserpine I wander
On the Night’s Plutonic shore,
Hoping, fearing, while I ponder
On thy loved and lost Lenore,
Till thy voice like distant thunder
Sounds across the distant moor.

From thy wing, one purple feather
Wafted o’er my chamber floor
Like a shadow o’er the heather,
Charms my vagrant fancy more
Than all the flowers I used to gather
On “Idalia’s velvet shore.”

Then, Oh! Grim and Ghastly Raven!
Wilt thou to my heart and ear
Be a Raven true as ever
Flapped his wings and croaked “Despair”?
Not a bird that roams the forest
Shall our lofty eyrie share.

Whitman did not attend that gathering of literati in New York City and neither did Poe in 1848, but Frances Osgood delivered the poem to Poe and it was published shortly thereafter. After a rather brief courtship with Edgar Allan Poe, the two gothic poets became engaged in fall of 1848.

Given the language in Poe's "To Helen" poem to Whitman, which says he first saw her in a beautiful rose garden, it is believed the rose garden shown in the back of the house is where Poe first glimpsed Whitman. 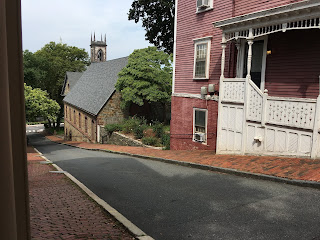 It was later revealed that Poe saw Whitman standing near the front door of her home as he strolled Benefit street with Frances Osgood in 1845. Osgood wanted to introduce Poe, but he refused for unknown reasons. 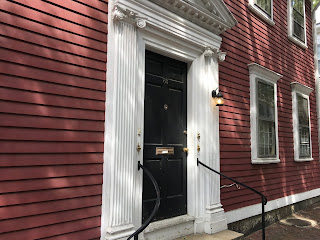 The home is still lived in today. Sadly there is no sign out front that the home used be where Sarah Helen Whitman, Edgar Allan Poe's fiancée lived for many years. An account of Poe and the romance he had with Whitman is laid out in Coffee with Poe: A Novel of Edgar Allan Poe's Life. Enjoy. 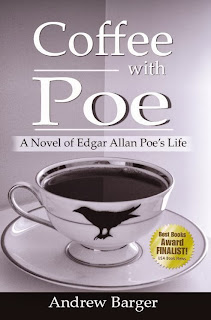