Review of The Dice Man by Luke Rhinehart 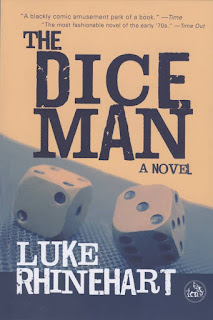 Albert Camus ("The Stranger"). Jean-Paul Sartre (Author of "Existentialism and Humanism"). Simone de Beauvoir ("She Came to Stay"). They are considered the leading French--if not the worldwide--proponents of existentialism. It's a big word that means, in essence, that to truly be free one kill their conscience; that one should act without fear of moral consequences.

Robert Smith, lead singer of The Cure, was greatly influenced by them. His song "Killing an Arab" was based on "The Stranger" and he stated that he read Sartre in the original French when in high school. It's believe that "Six Different Ways" by The Cure (Head on the Door Album) is about "The Dice Man" and it would seem to fit given Robert Smith's penchant for existentialism. See my Cure blog -- Disintegration Nation.

That's all fine and good, but where does that leave "The Dice Man"? The 1971 cult novel emulates these existential heroes by introducing readers to Dr. Luke Rhinehart, a fictional character (we think) who just happens to have the same name as the author of the novel. Hoomph. George Crockcroft is real name of the author and Luke Rhinehart is his penname, which makes tongue-in-cheek sense. Crockcroft sounds more like a penname or perhaps if you last name is Crockcroft you need a penname.

Dr. Rhinehart adopts the dicelifestyle by doing what a roll of dice tells him to do without regard to morality or social outcome. The protagonist tells readers: "The secret of the successful dicelife is to be a puppet on the strings of the die." We are told to "Create the options. Shake the dice. All else is nonsense."

If you are into existentialism or even nihilism, The Dice Man is for you. If not, the novel can drag over close to 600 pages and doesn't have the plotted storyline one might expect for a novel this size.

Posted by Andrew Barger at 5:23 PM