A Descent Into the Maelstrom by Edgar Allan Poe (1809-1849) is one of the best horror short stories originally published in the English language (or later translated into English) from 1800-1849. The story is considered as one of Poe's best science fiction tales, yet it contains many horror elements that are original in design and implementation. The story was first published in the May 1841 issue of Graham's Magazine. This is what Robert Armistead Stewart, a professor at Richmond College, had to say about it in 1911:

"A Descent into the Maelstrom" is the most enthralling of that trio of tales of pseudo-science that demonstrate Poe's wizard power of sweeping the reader from the solid basis of human experience into an acceptance of fancies repugnant to all physical laws. In verisimilitude and compelling interest it excels both the MS. Found in a Bottle and Hans Pfaal, and displays its supernatural element in the products of the subtle faculty of exaggeration which Poe may have developed under the stimulus of opium. . . . . The commencement of the tale is abrupt and succinct, in accordance with Poe's dictum in 'Marginalia': 'It is far better that we commence irregularly—immethodically—than that we fail to arrest attention; but the two points, method and pungency, may always be combined.' At all risks, let there be a few vivid sentences imprimis, by way of the electric bell to the telegraph. The vividness of the old man's story is wonderfully enhanced by being told with the localities under review, and the wild welter of wind and water sustains the narrative like some great orchestral accompaniment. The final sentence, allowing for incredulity on the part of the reader, is an artistic touch, and fully worthy of Poe's ingenuity."

Following is one of the most haunting passages of a shipwreck and maelstrom one will find in the literature for this time period:

Looking about me upon the wide waste of liquid ebony on which we were thus borne, I perceived that our boat was not the only object in the embrace of the whirl. Both above and below us were visible fragments of vessels, large masses of building timber and trunks of trees, with many smaller articles, such as pieces of house furniture, broken boxes, barrels, and staves. I have already described the unnatural curiosity which had taken the place of my original terrors. It appeared to grow upon me as I drew nearer and nearer to my dreadful doom. I now began to watch, with a strange interest, the numerous things that floated in our company. I must have been delirious, for I even sought amusement in speculating upon the relative velocities of their several descents toward the foam below. "This fir-tree," I found myself at one time saying, "will certainly be the next thing that takes the awful plunge and disappears;" and then I was disappointed to find that the wreck of a Dutch merchant ship overtook it and went down before.

I find it hard to believe that the protagonist of the horror story would have uttered the words as Poe has presented them, but this is a minor flaw in a major tale with a transitioning plot, terror, and characters that incite emotion to the end. 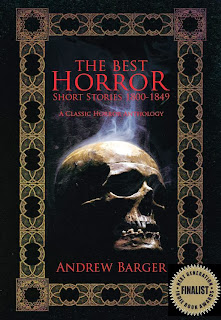