Did Poe Write a Werewolf Story? by Andrew Barger

Edgar Allan Poe (1809-1849) wrote scary stories in a number of supernatural genres. He did not invent the horror short story, but he took it to unbelievable heights. Poe penned ghost stories. He was the first to invent a closed room murder mystery (The Murders in the Rue Morgue of 1841) and a founding father of science fiction short stories. Poe also was the first to take us inside the head of a crazy man in The Tell-Tale Heart of 1843.

Yet Edgar Allan Poe failed to cover a few crucial genres in his short stories. For instance, he did not write a vampire or monster story. I have blogged on the former in the past. That is unfortunate as I am convinced that no one could have written a vampire story like Poe. What's more, zombie's had not been created in Poe's time. Unfortunately, Poe also did not write a werewolf story. If Poe did, it would certainly have risen to the level of one of the best werewolf short stories in the first half of the nineteenth century.
Below is a list of werewolf stories originally published in the English language during Poe's lifetime, which he may have read. They are found in the were anthology I edited: Transformation: The Best Werewolf Short Stories 1800-1849: 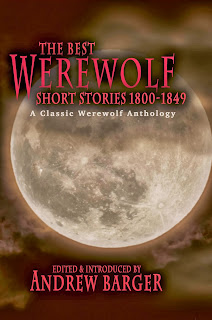 Posted by Andrew Barger at 2:52 PM